Nolan Anderson was born in the community of East Hamilton in Shelby County, Texas on Thursday, February 23, 1922.  His parents Ethel Moore and Jeff Alexander would have five children before her untimely death on November 11, 1926 at age 28.  Nolan was only four years old at the time and was without a mother until his father married Aleene Williamson October 10, 1930.  He attended Shelbyville High School but it is unclear whether he graduated. 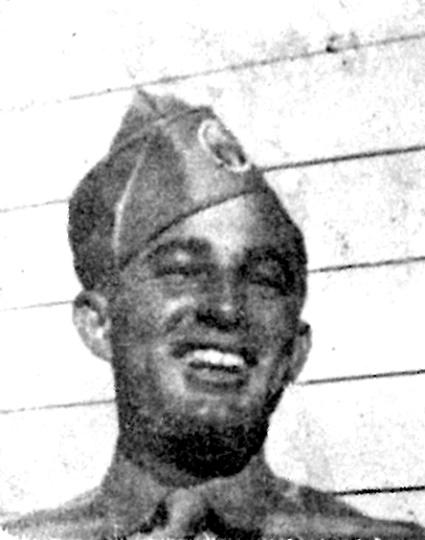 At age 17 he enlisted in the US Army on November 28, 1939 and attended training at Fort Sam Houston, San Antonio, Texas.  He was then assigned to Company B, 23 Infantry Regiment, Second Infantry Division. With the Japanese attack on Pearl Harbor Hawaii on December 7, 1941, the United States was again involved in a World War with Nolan Anderson on active duty.

In November 1942 Nolan volunteered for the 507 Parachute Infantry Regiment (PIR) that became part of the famed 82 Airborne Division commanded by Major General Matthew B. Ridgway. The $50.00 per month jump pay was a big incentive for many to become paratroopers.  The 507 PIR and Sergeant Anderson arrived in England in late 1943 and began training for the liberation of Europe. With two combat jumps under its belt, the 82nd Airborne Division was now ready for the most ambitious airborne operation of the war, Operation Neptune, the airborne invasion of Normandy (D-Day). The operation was part of Operation Overlord, the amphibious assault on the northern coast of Nazi-occupied France. On June 5-6, 1944, the paratroopers of the 82nd's three parachute infantry regiments and reinforced glider infantry regiment boarded hundreds of transport planes and gliders and, began the largest airborne assault in history. They were among the first soldiers to fight in Normandy, France.(1)

By the time the 82 Airborne was pulled back to England on July 13, 1944 it had seen 33 days of bloody combat and suffered 5,245 paratroopers killed, wounded or missing. Sergeant Nolan R. Anderson, serial # 6299488 was one of those killed in action, six days after D-Day, June 12, 1944.  The Division's post battle report read, "...33 days of action without relief, without replacements. Every mission accomplished. No ground gained was ever relinquished."

World War II ended on September 2, 1945 and in the days that followed many American families had to make what was no doubt an extremely tough and heart wrenching decision.  To leave their loved ones buried with their comrades in permanent American military cemeteries established on land donated by liberated countries or bring the remains of their loved ones back to the United States and either re-bury them in a local cemetery or in one of the many national cemeteries (such as Arlington) around the country. Beginning in 1947, a program for the repatriation of bodies was initiated and families were given the choice.  Nolan’s family wanted him to come home as did 60% of other families facing the same decision.(2)

It did not happen overnight as the return of over 171,000 war dead was a massive undertaking.  From the port of embarkation at Brooklyn, New York the remains of Sergeant Nolan Anderson arrived by train in Center, Texas on Wednesday, October 28, 1948.  An active duty soldier of equal rank accompanied the casket that was taken to West Hamilton to lie in state until.  Funeral services were held the next day at 2 p.m. at Mangum Funeral Home with Rev. W. H. Ingram officiating.  Sergeant Anderson was buried in the West Hamilton Cemetery, Shelbyville, Shelby County, Texas with full military honors.(3) 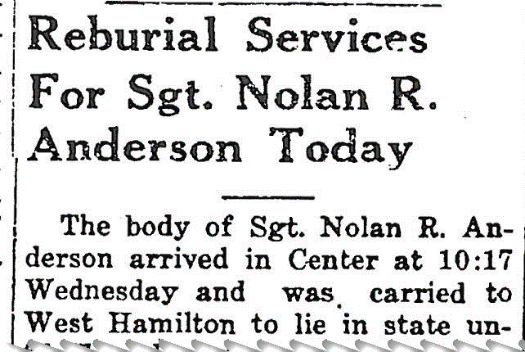 Day is done, God is nigh.

“That these dead shall not have died in vain”….Abraham Lincoln