“In the long and honored history of America, there are those that paid the last and final price”.

Marion Bedford Whiteside, Jr. was born in the fall of 1918, September 28 to Compie Bridwell and Marion Bedford Whiteside, Sr.  His birthplace, Timpson, Shelby County is located in far east Texas not far from the Louisiana state line where his parents were married on Christmas day, 1917.  At the time of his birth,  father Marion Sr. was serving in France during World War I as a Private in Company A, 360 Infantry Regiment, 90 Infantry Division.  Honorably discharged March 14, 1919 he would see his six month old son for the first time.  A brother Eugene Edward would complete the family in 1927 and as an adult would become a medical doctor. His father provided for the family by farming and later as a truck driver for the Gulf Pipe Line. 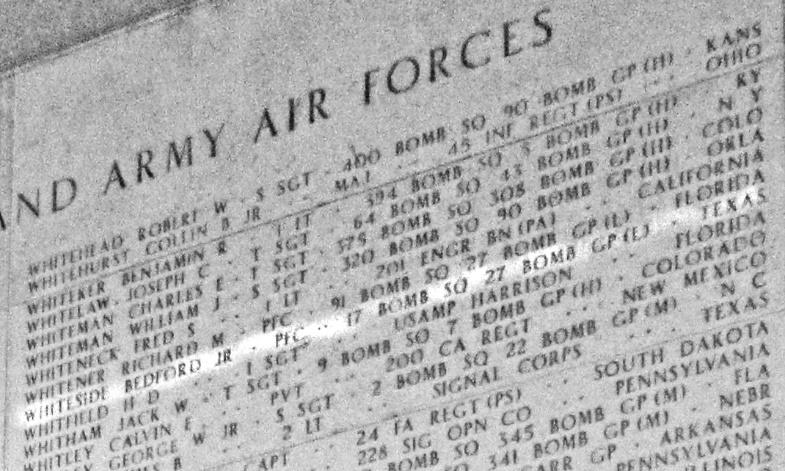 Junior as he was known to family and friends appears to have had a typical small town upbringing.  While in school he was a member of the Future Farmers of America and the 4-H. In March 1935 he attended the Houston Fat Stock Show with the FFA and during high school he was a member of the Timpson Bears football team lettering in 1938.  Baccalaureate Services were held at the Timpson High School on Sunday, May 21, 1939 with Reverend Porter M. Bailes, of the First Baptist Church, Tyler, Texas giving the sermon. Two days later Junior Whiteside graduated with 47 other students including Kenneth Crausby who would be killed in action in the upcoming world war.

After graduation Junior worked for the Timpson Fire Department until December 14, 1939 when he enlisted in the US Army Air Corps at Barksdale Field, Bossier City, Louisiana.  The 1940 US Census found him as a soldier, living in the barracks with many others at Barksdale Field. He trained as an aircraft mechanic with the 17 Bombardment Squadron of the 27 Bombardment Group. In October 1940 the unit moved to Hunter Army Airfield in Savannah, Georgia. A year later Marion Whiteside, Jr. married Miss Agnes Louise Powers at the First Baptist Church, Houston, Texas with Rev. Jeral Overhold officiating.  The bride was the daughter of Mr. and Mrs. Ben Powers residents of Timpson prior to relocating in Houston. The newlyweds then traveled to Galveston for their honeymoon.

Private First Class Whiteside and his unit departed San Francisco, California on the USS Coolidge for the Philippine Islands on November 1, 1941. On November 6 they docked at Honolulu Hawaii where everyone was issued a pass from 8:30 p.m. to 2 a.m. when the Coolidge sailed again.  They arrived November 20 in Manila and were to stay at Fort McKinley until their airplanes arrived. On December 7 the Japanese attacked Pearl Harbor Hawaii and World War II began. Christmas day found the entire 27 Group safely out of Bataan still waiting on airplanes that would never arrive. The Japanese entered Manila on January 2, 1942 and all Air Corps units were ordered to immediately begin training as infantry units.

Junior Whiteside and his unit were captured in Bataan following the American surrender on April 9, 1942. Following the Allied surrender, the Japanese began the forcible transfer of American and Filipino prisoners of war to various prison camps in central Luzon, at the northern end of the Philippines. The largest of these camps was the notorious Cabanatuan Prison Camp. At its peak, Cabanatuan held approximately 8,000 American and Filipino prisoners of war that were captured during and after the Fall of Bataan. Camp overcrowding worsened with the arrival of Allied prisoners who had surrendered from Corregidor on May 6, 1942. Conditions at the camp were poor and food and water supplies extremely limited, leading to widespread malnutrition and outbreaks of malaria and dysentery. PFC Junior Whiteside died of malaria and mistreatment on October 19, 1942, at the Cabanatuan Prison Camp in Nueva Ecija Province at the age of 24. He was buried in a communal grave in the camp cemetery along with other deceased American POWs; however, his remains could not be associated with any remains recovered from Cabanatuan after the war. By the time the camp was liberated in early 1945, approximately 2,800 Americans had died at Cabanatuan. Prisoners were forced to bury the dead in makeshift communal graves often completed without records or markers. As a result, identifying and recovering remains interred there was difficult in the years after the war. Private First Class Whiteside is memorialized on the Walls of the Missing at the Manila American Cemetery in the Philippines. 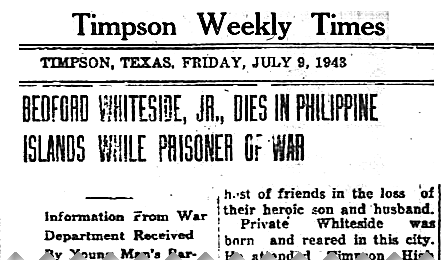 Epilogue:  His father Marion, Sr. passed in 1958 at the age of 67.  Gold Star Mother, Compie lived a long life to age 97.  Both are buried in the Woodlawn Cemetery, Timpson, Texas. Wife Agnes Louise remarried (last name Penn) and passed December 2002 at the age of 81. She is buried in the Forest Park Cemetery, Houston, Texas.