WORLD WAR I – KILLED IN ACTION 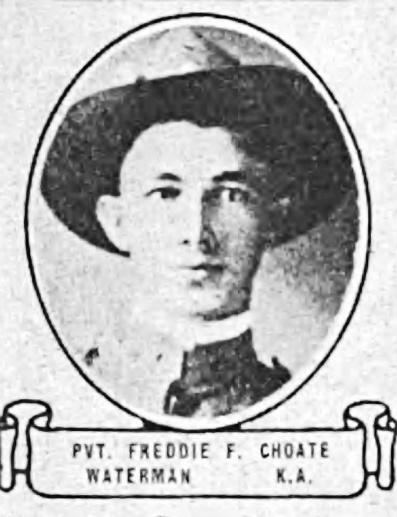 Freddie Forrest Choate was born during the last dog days of summer, August 30, 1894, nine years after the new courthouse on the square in Center, Shelby County, Texas opened for business.  His birthplace, the town of Waterman, lies 13 miles from Center which would have been a good distance at that time.  His parents Elizabeth “Lizzie” Ann Anthony and Andrew Bradley Choate were both native Texans having been born in Shelby County.  His paternal grandparents Redmon and Sarah moved to Shelby County from Tennessee about 1836.  Freddie was the youngest of a dozen children, seven boys

and five girls, which would have been a big help on the family farm. One of his sisters, Mollie died as an infant and father Andrew passed in August 1900 at the age of 52 just before Freddie’s sixth birthday.  With the help of her children Lizzie continued to operate the farm to her death in 1912.

With the United States declaring war on Germany on April 6, 1917, nearly three years after the World War began in Europe, a national army through conscription was needed.  The Selective Service Act of 1917 required that all men between the ages of 21 and 30 register on June 5, 1917.  Freddie now 22 and working for the Texas Company (today known as Texaco) in Port Arthur complied at Precinct 8 in Jefferson County. He listed himself as single, of medium height, slender built, grey eyes and brown hair.

Three months later on September 19, 1917, twenty-one days after his 23rd birthday Freddie Choate was inducted into the US Army at Port Arthur, Texas.  Following basic training at Camp Travis, San Antonio, Texas he was moved to Camp Mills, New York and assigned to Company B, 360 Infantry Regiment. As part of an infantry replacement detachment of the 37 Infantry Division he departed Newport News, Virginia on July 14, 1918 aboard the British transport SS Peleus with 1,214 other enlisted men.  They disembarked at Halifax, Nova Scotia for reassignment to Company B, 143 Infantry Regiment, 36 Infantry Division.  Departing Halifax July 27 on the transport SS Nagoya they made their way to France via Liverpool England.  During this travel Freddie had listed his brother-in-law J. A. Tindol as his next of kin.

Upon arrival in France, Freddie now a Private First Class was reassigned to Company C, 9 Infantry Regiment (Manchus), 3 Infantry Brigade, 2 Infantry Division.  He would have caught up to his new unit about the time it relieved a French unit in the Marbache Sector on August 6 where it remained until ten day later. Active preparation was now taken up for the impending St. Mihiel offensive, a major battle fought September 12 to 15, 1918.  The last major battle, the Meuse-Argonne Offensive began on September 26. PFC Choate and his 9 Infantry Regiment fought intense German resistance at what was called “The Battle of Blanc Mont Ridge” where he was severely wounded the morning of October 3 and died the following day of those wounds.  He was buried October 5 in Grave # 2, French Military Cemetery, commune of La Veuve, department of Marne. His comrades would fight on until the armistice was declared, November 11, 1918.  By this time the 2 Infantry Division had suffered 25,076 casualties in all operations participated in.  Following the armistice the division was assigned to Army of Occupation duty in Germany until movement home began on July 25, 1919.

Following the Great War, now known as World War I, America faced a problem it had never encountered before; thousands of her citizens both male and female were buried on foreign soil. In October 1919, families were given the choice of leaving their loved ones buried in an American Cemetery in Europe with their comrades or bring them home for reburial in a State/National Cemetery or a cemetery of their choosing.  The Choate family chose to bring their youngest back home to Shelby County, Texas.  With this decision in hand the Graves Registration Service of the Army Quartermaster Corps began the process that was not an immediate one given the huge number of 46,000 remains. It did not help that the French took until late 1920 to finally lift their band on the return of bodies. The cost to recover the dead would reach $30 million or $400 million in today’s dollars.

On May 11, 1921 the remains of Freddie Choate were disinterred and prepared for shipment home.  His casket arrived at Antwerp, Belgium June 6 and departed ten days later aboard the US Army Transport SS Wheaton arriving in Hoboken, New Jersey on July 2.  Aboard the Wheaton were the bodies of 5,824 American Soldiers including six others from Shelby County Texas; Norfleet E. Armstrong, Thomas H. Franks, Bert Gordon, Ira Hoffman, Stephen H. Oates and Kirt C. Ramey.

Eight days later on Sunday, July 10, 1921, a Memorial Service by the American Legion for 7,161 men who made the supreme sacrifice during the World War was held at Pier 4, Hoboken, New Jersey at 3:00 p.m.  General John “Black Jack” Pershing who served as Commander of the American Expeditionary Forces on the Western Front was in attendance and eulogized the bravery, self-sacrifice and intense patriotism of American Troops.  There were Jewish, Protestant and Roman Catholic services with music by a military band from Fort Hamilton.  In addition to those the SS Wheaton returned home there were 1,337 fallen aboard the transport SS Somme. 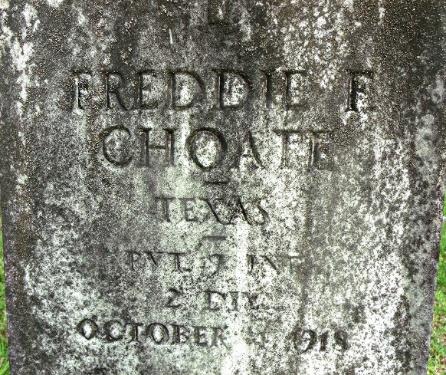 On August 4 with a military escort, the remains of Freddie Choate departed by train from Hoboken for the final leg of the journey home that ended August 10 to consignee Mrs. Willie Choate Parrish, Grigsby, Texas (sister).  Documentation of his burial at White Rock Cemetery, Shelby County could not be found but there is no doubt that the local Posts of the American Legion and Veterans of Foreign Wars assisted the family and rendered Final Military Honors.  Eighteen years later his sister Willie made application for his Veteran Headstone.  Day is done, God is nigh.