Every Veteran Has a Story 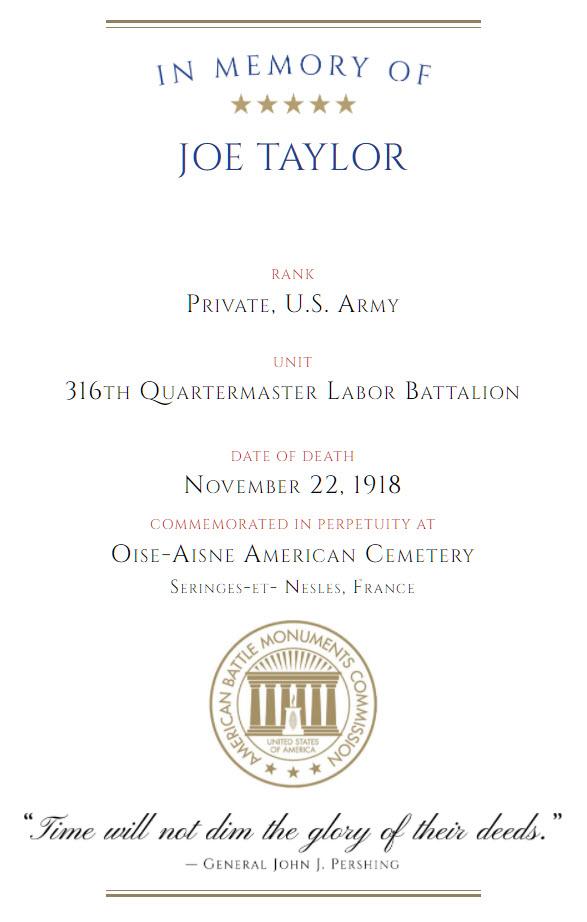 Joseph “Joe” Taylor born November 18, 1895, was the third son born in the far East Texas Community of East Hamilton to Sarah Harper and Henry Taylor.  The African American couple had been married there also in 1889.  He had two older brothers Calvin (1893) and James (1894).  His birth place was 28 miles southeast of Center that serves as the county seat of Shelby.  Father Henry provided for the family on the mortgaged farm he worked in Shelby County. Growing up each of the boys no doubt would have had assigned chores to help out.  Not much is known about his youth as he grew to manhood.

With the United States declaring war on Germany on April 6, 1917, nearly three years after the World War began in Europe, a national army was needed and the Selective Service Act of 1917 provided for this through conscription.  The first of three draft registrations was held on June 5, 1917 for men between the ages of 21 and 30.  Joe now 22 complied by registering at Precinct 11 in Shelby County.  Evidently he had little schooling and could not write as he signed the form with an “X” that was then so noted by registrar F. E. Middleton.  He stated; that he worked for his father on a farm; was single; claimed no exemptions to the draft; was of medium height and built with brown eyes and dark hair.(1)

One year later he was inducted into the US Army on June 20, 1918 in Center, Texas and was sent with other African American draftees to Company 14, Fourth Training Battalion, 165 Depot Brigade, Camp Travis, San Antonio for basic training. On July 16, 1918, Joe found himself at Camp Stuart, Virginia in a Labor Battalion of the Quartermaster Corps. His service record shows he entered the hospital there until September 7 but does not give specifics.(2) On September 15 He departed Newport News, Virginia with Company A, 316 Labor Battalion aboard the ship SS Kursk. Joe listed his mother Sarah of East Hamilton, Texas as his next of kin.(3)

Although undocumented he and the 316 Labor Battalion would have reached France via Liverpool England some eleven days later.  Military leaders at that time believed African Americans did not have the physical, mental, or moral character necessary to withstand combat. Consequently the Army assigned them to labor battalions, constructing wharves, docks, railroads and warehouses. They also loaded and unloaded freight, felled trees, repaired roads and buried soldiers killed in action. Private Joseph Taylor was in the 80% to serve in this capacity.(4) 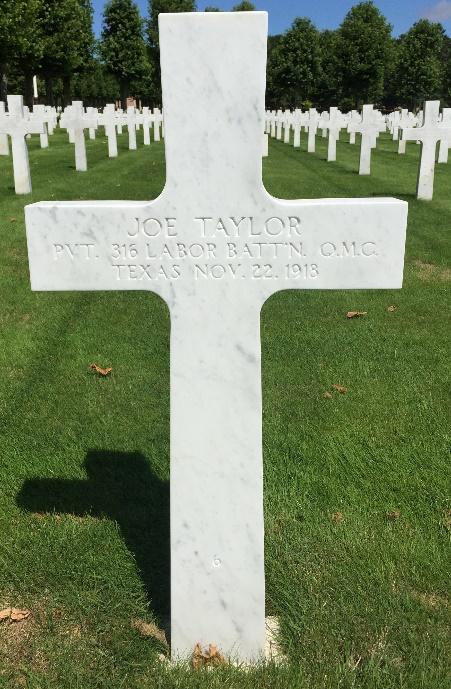 The Armistice ending the World War was signed on November 11, 1918.  It was about this time that Joseph entered a Base Hospital and died of cerebrospinal meningitis eleven days later, November 22. The following day he was buried in Temporary Grave # 1461, American Cemetery, Commune of Gièvres, Department of Loir-et-Cher, Central France.(5)

In October 1919, families of fallen American Soldiers were given the choice of leaving their sons and daughters buried in an American Cemetery in Europe with their comrades or bring them home for reburial in a cemetery of their choosing.  Sarah and Henry chose to leave Joseph with his comrades as did approximately 30% of the families facing the same decision.  In keeping with his parents wishes, he was reburied in Grave 6, Row 16, Plot B, Oise-Aisne, American Cemetery and Memorial, Fere-en-Tardenois, Departement de l'Aisne, Picardie, France on September 7, 1922.(5)  Day is done, God is nigh.

Epilogue: His mother Sarah would have been eligible to visit Joseph’s grave under the Gold Star Mother’s Pilgrimage program of 1930, however no documentation could be found. She passed in May 1947 at the age of 77. Father Henry lived to be 89 passing in February 1955.

(4). (US Army Corps of Engineers, “A Historic Context for the African American Military Experience”, Steven D. Smith and James A. Zeidler, July 1998).