Every Veteran Has A Story

Bobby Allen Crump was born during the dog days of summer, August 14, 1926 in the far east Texas county of Shelby. His parents were Fleta Gunnels and Charlie Rouse Crump. His father like many at that time farmed for a living. Tragically his mother died 18 days after his birth at the age of eighteen. As the great depression began in the late 1920’s, Bobby and his father lived with his paternal grandmother Rosey Crump on Wood and Tenaha Road, Panola County, Texas.(1) Father Charlie remarried a lady named Leyla Jane Phillips and two half-siblings, Charles Phillip and Jane were born to the family. 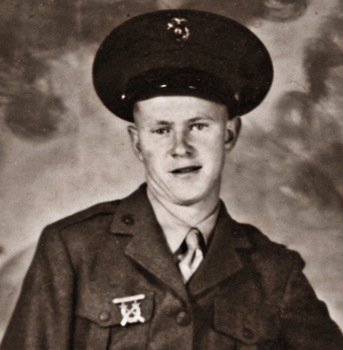 On December 7, 1941, the Empire of Japan attacked the military facilities at Pearl Harbor, Hickam and Wheeler Fields, Hawaii. The United States was once again involved in a world war but this time on two fronts, Europe and the Pacific. On October 30, 1943, Bobby Crump at the age of 17 enlisted in the US Marine Corps. He took his seven week basic training at San Diego, California where 223,000 other Marines would also be trained during World War II. Upon arrival he and fellow recruits were given their first Marine Corps meal and their medical check-ups and inoculations. They were then issued dog-tags, identification cards, service record books and given a service number. Haircuts, clothing, gear and rifle issue then followed. After 332 hours that included weapons, physical, garrison, and field training Private Bobby Crump and fellow recruits graduated as US Marines.(2)

Bobby was assigned to the First Marine Battalion, First Marine Division and by the time he joined them in the Pacific his new unit was a battle tested and hardened outfit having fought in the Battles of Guadalcanal and New Britain. He received his first taste of combat in the Battle of Peleliu that began on September 15 and was fought against Japanese forces to November 27, 1944. The First Marines landed on Peleliu at 08:32 hours, September 15 on White Beach 1 and 2 and were immediately caught in a crossfire of Japanese artillery.(3) Two days later Corporal Crump was wounded in action.(4) It is not known how serious the wound was or when he returned to his unit.

Next facing Corporal Crump and the First Marines was the largest amphibious assault in the Pacific Theater during World War II – The Battle of Okinawa, code named Operation Iceberg. The 98-day battle against Japanese forces lasted from March 26 to July 1945. Killed in action were 4,907 Navy, 4,675 Army and 2,938 Marines.(5) Bobby was again wounded May 5, 1945 and then killed in action on May 30, 1945 at the age of 18.(4) The June 25, 1945 edition of the Marshall News Messenger Newspaper, Marshall, Texas stated that his parents had been notified of their son’s death [by telegram from the War Department followed by an official letter]. Bobby was buried in the First Marine Division Cemetery on Okinawa.

His comrades in the Pacific would continue the fight until September 2, 1945 when the Japanese formally surrendered ending World War II. Following the end of the war of which more than 405,300 Americans died, families were offered burial options. They could choose burial in an overseas military cemetery or bring the remains of their loved one home to the United States for burial in a cemetery of their choice. Bobby’s father Charlie chose the latter as did approximately 60% of other families facing the same decision.(6) It was an enormous undertaking and did not happen overnight. 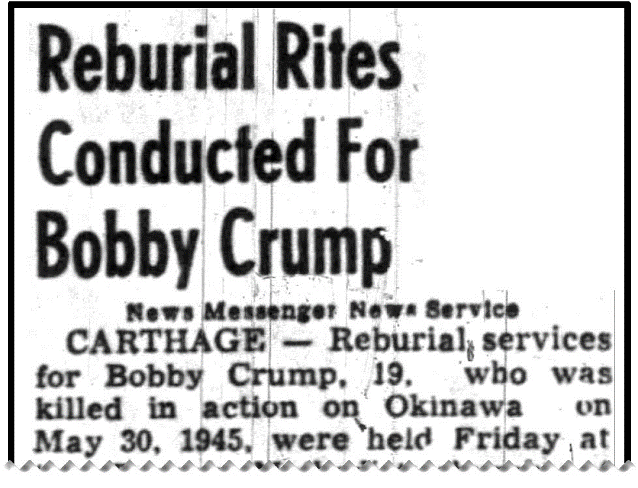 The January 18, 1949 edition of the Longview News-Journal, Longview, Texas announced that Corporal Bobby A. Crump, Marines was one of the  2,012 bodies of Americans who lost their lives in World War II that was returned from the Pacific area aboard the Army Transport Sergeant Jack J. Pendleton. From the port of embarkation at Oakland, California and with military escort, the remains of Bobby Allen Crump came home to rest. The Marshall News Messenger reported reburial services were held, Friday, March 4, 1949 at the Ramah Methodist Church at 2:30 o’clock with the Rev. C. T. Wallace and Rev. Paul Wallace officiating. Survivors included his father and stepmother, Mr. and Mrs. Charlie Crump, a brother Philip Crump and a sister, Jane Crump. The American Legion Post 353, Carthage, conducted military services at the graveside.  On March 21, his father Charlie made application for a flat granite Veteran Marker with Christian emblem for his son’s grave. Bobby was part of that “Greatest Generation” that truly saved the world. Day is done, God is nigh.

“That these dead shall not have died in vain”…..Abraham Lincoln