Every Veteran Has A Story: Isaac Alexander Samford

Isaac Alexander Samford (sometimes spelled Sanford) was born in Center, Shelby County, Texas to Matilda Jane Potts and James Kaufman Samford. He like many of that time grew up on a farm with a large family of six sisters and five brothers.

Seven months following the outbreak of the World War in Europe, Isaac voluntarily enlisted in the Regular Army in Galveston, Texas on February 17, 1915. Following basic training he was assigned to Company I, 28th Infantry Regiment that was serving in Texas to assist in guarding the Mexican border against raids by Pancho Villa. Two months following the United States entry into World War I on April 6, 1917 Isaac had rapidly been promoted through the ranks to Battalion Sergeant Major on June 16, 1917. He was then promoted to Regimental Sergeant Major and assigned to Headquarters Company, 4th Division. On May 3, 1918 Isaac arrived in France and participated in the Aisne-Marne Offensive, Sain Mihiel Offensive and the Meuse-Argonne Offensive that ended the war November 11, 1918(1). During operations the division took 2,756 prisoners and suffered 12,504 casualties. The Fourth Division was assigned Army of Occupation duties and entered Germany on December 3(2).

On April 1, 1919 Sergeant Major Samford was appointed as an Army Field Clerk (later known as Warrant Officer).  He then departed Brest, France aboard the USS Leviathan with Casual Company, Field Clerk Detachment on June 29, 1919 and arrived at the port of Hoboken, New Jersey, July 5(3). Ten days later Isaac and Miss Marie Alice McCue were married at the home of the bride’s mother, Mrs. Alice McCue, 1003 Park Avenue, Hennepin, Minnesota. Rev. Charles Fox Davis performed the ceremony according to the Star Tribune, Minneapolis, Minnesota, July 20, 1919(3). Their only child, son Gordon was born April 12, 1920 at Fort Sam Houston.

Field Clerk Samford was released from active duty and honorably discharged June 30, 1922.  Sometime after that he reentered the Army and by 1927 was stationed at Fort Sam Houston, San Antonio, Texas. Records show he was also stationed at Fort McPherson, Atlanta, Georgia in 1934. The 1940 census documented him living as a soldier in the grade of Master Sergeant at Department Headquarters, [Fort Shafter] Honolulu, Hawaii(4). Wife Marie and son Gordon resided at 1236 Kamehameha IV Road, Honolulu, Hawaii(5). 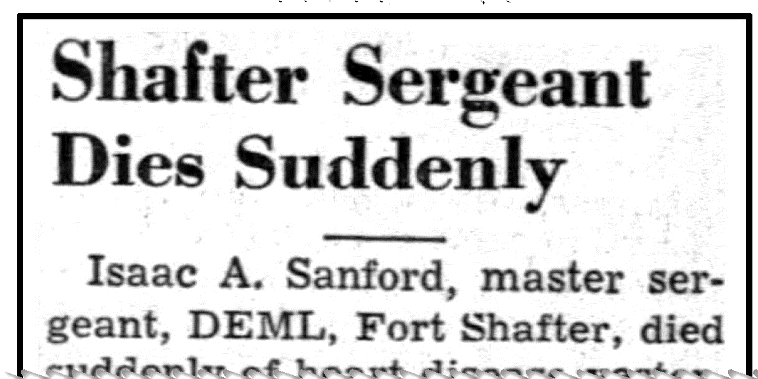 The Honolulu Advertiser, Honolulu, Hawaii dated August 23, 1940 reported that “Master Sergeant Isaac A. Sanford [sic] died suddenly of heart disease yesterday at 4:20 p.m. while visiting the quarters of First Sergeant John A. Watterau, 19th Infantry, Schofield Barracks. Sergeant Sanford [sic] was on duty with the Hawaiian department headquarters and was scheduled to leave for the mainland next Wednesday with his wife [and son]”. The Shrevport Journal, Monday, September 9, 1940 reported “Final rites for Isaac Samford, Master Sergeant of the US Army who died suddenly in the Hawaiian Islands was held at the home of his mother, Mrs. J. K. Samford, Sunday morning at 9 o’clock. The body arrived in Center Saturday morning. Members of the Sam Samford Lodge of Masons of which Sergeant Samford was a member had charge of the services at {Sandhill] cemetery where the interment took place following a short service”.   Day is done, God is nigh.

Epilogue: His son Gordon served during World War II, lived to age 81 and is buried with his father in the Sandhill Cemetery. Wife Marie died in 1977 at the age of 77 and is buried in Evergreen Cemetery, Brainerd, Crow Wing County, Minnesota.