Every Veteran Has A Story - Henry Essery

Robert Henry Essery was born during the Christmas season of 1925, December 12th in Panola County, Texas. His parents Lula Lankford and Marion Phillip Essery had been married there on Christmas Eve of 1911 and along with Robert had six other children; Clara Claudine (1916), James (1919), Winnie (1921), Lucy Elizabeth (1923), Marion Edward (1928) and Jessie Kenneth (1931). Like many of that time they were living on a farm in 1930 in Precinct 7, Corinth Road, Shelby County, Texas when the “Great Depression” began.(1)  Times were hard and tragically mother Lula passed away on July 30, 1931, five months after giving birth to her son Jessie. His brother James died of malaria at the age of 16 on August 2, 1935 and five years later, father Marion passed on March 19, 1940.  Robert now age 15 and three of his siblings then lived with his paternal grandparents Louisa Lee Milford and Robert Frank Essery in Panola County.(2) 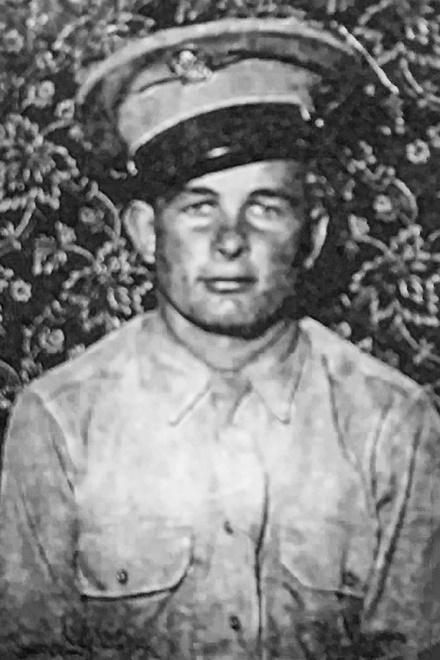 With the surprise Japanese attack on US military installations at Pearl Harbor, Hickam and Wheeler Fields, Hawaii, on December 7, 1941, the United States was once again involved in a World War. This war was different than the previous as it would be fought on two fronts, Europe and the Pacific. On December 24, 1943, twelve days after turning age eighteen, Robert complied with the Selective Service Act of 1940 by registering for the military draft at Local Board # 1, Lufkin, Angelina County, Texas. His registration card, DSS Form 1 noted the following; Residence, General Delivery, Zavalla, Angelina County, Texas; Person who will always know your address, Mrs. Claudine Youngblood [sister], General Delivery, Zavalla; Employment, Odis Dunn Sawmill, nine miles east of Lufkin; Description, race white, five foot eight inches tall, 145 pounds, blue eyes, brown hair with a light complexion.(3)

Receiving his draft notice Robert Essery took the oath of enlistment on April 24, 1944 at Camp Wolters, Texas located four miles northeast of Mineral Wells. The camp was one of the largest infantry replacement training centers in the United States and also served as a German POW camp. Following approximately twelve to thirteen weeks of training Private Essery was assigned to a replacement company destined for the 126th Infantry Regiment, 32nd Infantry Division (Red Arrows) that had been fighting in the South Pacific since April 1942. Robert and his fellow replacements caught up with their new unit in time to participate in the amphibious invasion of the island of Leyte in the Philippines that began on October 17, 1944 and ended with an allied victory December 26. As part of the Philippine Campaign, the 126th Regiment then participated in the Battle of Luzon, codenamed S-Day, that began with an assault landing on January 9, 1945. This battle would continue to the allied victory on August 15.  Private First Class Robert Henry Essery, serial # 38685676 was killed in action on April 23, 1945 at the age of 19 and became one of the over 8,000 US combatants who died during the Battle of Luzon.(4)

Robert was buried with military honors in an American temporary cemetery on Luzon with the other fallen. His comrades in the Pacific would continue the fight until the formal surrender of Japan on September 2, 1945, fulfilling the prophecy of the late President Franklin D. Roosevelt who on December 8, 1941 stated, “No matter how long it may take us to overcome this premeditated invasion, the American people in their righteous might will win through to absolute victory”.  Although not documented, the family would have been notified of his death by telegram from the War Department, Washington D. C. followed by written notification.

The Timpson Weekly Times newspaper dated October 19, 1945 reported “An impressive service was held Sunday at Corinth to present posthumously the Bronze Star for Robert Essery, the award being made to Mr. and Mrs. Frank Essery, grandparents of the deceased veteran. A large group of Legionnaires, ex-service men and service men [active duty] headed by T. L. Brown, Commander of Ferguson-Tims-Morrison Post No. 90 of the American Legion of Timpson joined citizens of the community in the service. The service was opened by advancing the National Colors, A. H. Boodell in charge. Song by the audience was followed by the invocation by Rev. H. G. Beasley. Rex Brinson of the local Legion post made a short talk. Colonel R. R. Morrison in a brief address, appropriate and impressive, presented the medal. The concluding prayer was given by Major Buford McLeroy, Chaplain who has just returned from the south Pacific”. 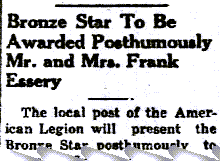 In the days that followed many American families had to make what was no doubt an extremely tough and heart wrenching decision.  To leave their loved ones buried with their comrades in permanent American military cemeteries established on land donated by liberated countries or bring the remains of their loved ones back to the United States and either re-bury them in a local cemetery or in one of the many national cemeteries (such as Arlington) around the country. Beginning in 1947, a program for the repatriation of bodies was initiated and families were given the choice.  Robert’s family wanted him to come home as did 60% of other families facing the same decision.

It did not happen overnight as the return of over 171,000 war dead was a massive undertaking.  From the port of embarkation at Oakland, California the remains of Private First Class Robert Essery arrived by train in Timpson, Shelby County, Texas on Tuesday July 19, 1949. The Timpson Weekly Times Newspaper, July 22, 1949 reported “Members of the American Legion, relatives and friends met the train and accompanied the body to Taylor Funeral Home to await funeral rites. Reburial services were held at Corinth Wednesday afternoon at 3 o’clock, rites being conducted by Rev. Ottie Reed, assisted by Bro. Ed Rhodes. In charge of the American legion, full military honors were conducted at the grave and during the service. He is survived by; his grandparents, Mr. and Mrs. R. F. Essery and Mrs. F. M. Milford; three sisters, Mrs. Bernice Youngblood of Rye, Texas, Mrs. Velbert Britton of Timpson and Mrs. Archie Cox of Red Level, Alabama; two brothers, Marion Ed Essery and Jessie Kenneth Essery, both of Timpson”. On July 28 his grandfather Robert made application for his flat granite veteran marker with Christian emblem. Day is done, God is nigh. 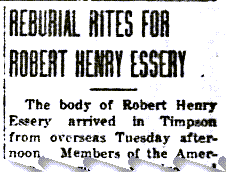 “That these dead shall not have died in vain”…..Abraham Lincoln 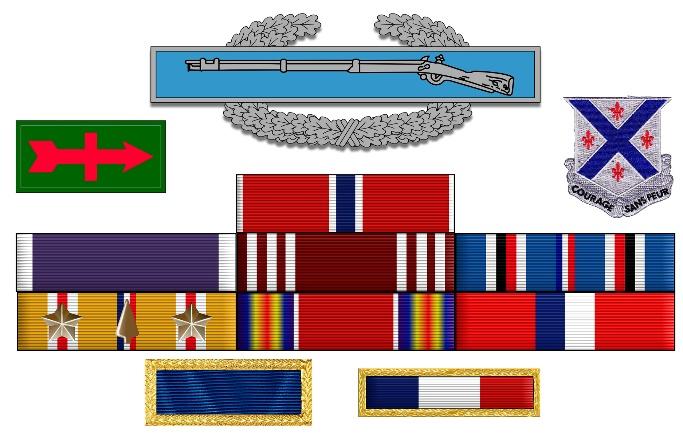